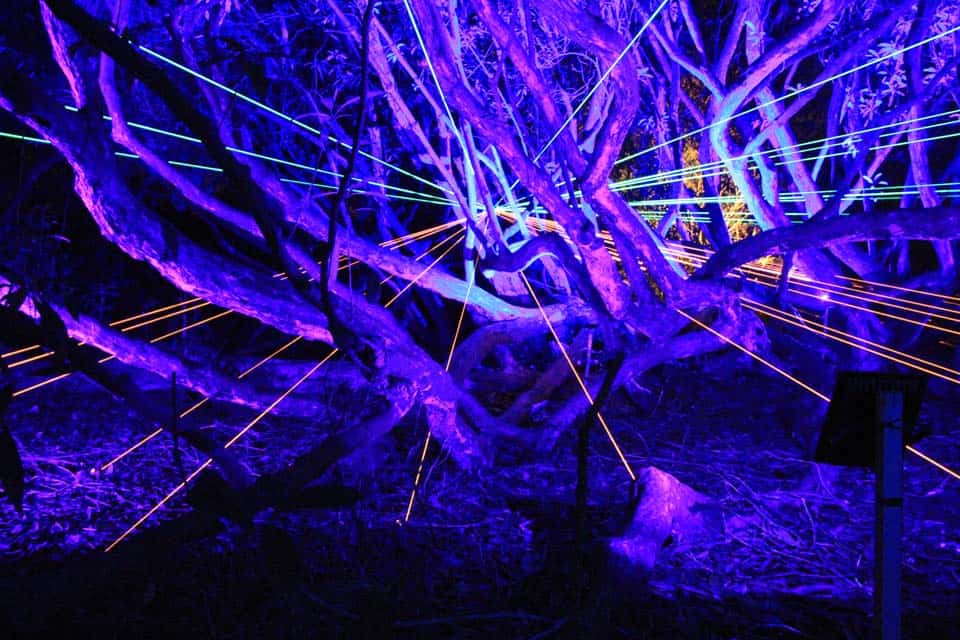 Animated stormy clouds above a party

Remnant Ecologies and Do Not Feed the Birds

A series of 5 sound installations containing fragments of British bird song, triggered by algorithms, wind, sun and the birds themselves, as part of Activate’s Inside Out Festival.

The floating dance floor was back again at Festival Number Six, and has now been made a permanent feature of portmeirion.

Working as part of Trophic Cascade, to create route lighting and architectural lighting for their botanical show throughout the Museum Gardens in Illuminating York.

TreeSong was based on an idea designed with three aims: improving public knowledge and understanding of nature within the urban environment, highlighting conservation issues within Bristol, and connecting people to nature and encouraging their appreciation of the natural urban wealth through interaction.

A 150-year-old beech tree on Bristol’s Durdham Downs was chosen to be the focus of the project. The composer William Goodchild translated the tree’s song into a 15 minute orchestral work which was premiered at St George’s Bristol on 29 November 2015. Bristol Ensemble gratefully acknowledges support from PRS for Music Foundation for this project.

Installation artist Jony Easterby created a structure to capture sounds from the tree. At its heart, a wooden collar around the trunk of the tree acted as a pick-up to translate vibrations through 32 piezos and over 200 strings, amplifying the sound of the wind blowing through the tree on Bristol’s Durdham Downs

Bristol Ensemble is the city’s only professional chamber orchestra, and was founded in 1994 by its Artistic Director, Roger Huckle. The Ensemble gives live performances in Bristol and around the South West as well as making recordings for TV and film soundtracks and commercial use

The slide returned to glastonbury , this time shooting out of a rusting rocket as part of Greenpeace’s eco-village of the future.

Castell y Bere, Snowdonia, Wales UK. Friday 01 May 2015
A unique public performances in the grounds of the 13th century castle – Castell y Bere, Abergynolwyn, Mid Wales. The performance ‘Spinning a Yarn’ is part of Ar Waith Ar Daith, an artistic journey across the length and breadth of Wales to mark the 10th anniversary of Wales Millennium Centre, the national centre for the performing arts, created by outdoor experts Walk the Plank. The journey of Welsh myth and magic will continue over the next few months before it culminates in a spectacular performance outside Wales Millennium Centre in Cardiff on Saturday 12 September 2015.
photo © keith Morris / Alamy Live News

As part of Greenpeace’s Oceans campaign we made a death slide that festival goers would slide down dressed as fish to learn about over fishing.  At 7m high it was quite a drop.

This captivating collection was inspired by sound artist Max Eastley’s explorations into Aeolian (wind driven) instruments, from their mythology and curious history, to contemporary explorations of them. Six of the finest sound artists around today (Mark Anderson, Jony Easterby, Kathy Hinde, Dan Fox,Nathaniel Mann and Mike Blow) have joined Max and each created their own instruments that harness the wind.  Their instruments form a unified experience made up of an ever changing sound world that captures the imagination.

The Rose Garden Tea Party came into being as part of Kew’s summer season 2013. Focusing on the wonders of edible plants, visitors can get up close and personal to the living ingredients that make up a quintessential British tea party.

The fundamental idea behind the table is to portray botanical information in a fun and theatrical way; a feast for the eyes enticing people to learn about the plants that make the food products they come into contact with every day.

Hop from one place-setting to the next to discover the different food you might find at a tea party. Be it Strawberry Jam, Earl Grey or Piccalilly, there are plenty to choose from. But there’s also a hint of mad hatter, so look out for riddles, clues and plants that aren’t what they seem…

Whether you’re a connoisseur of hand-decorated English china, appreciative of traditional carpentry techniques, or a student of botanical illustration, there is something at the table to entertain everyone.

By Jenny Hall from Crafted Space

“Playful and innovative, The House was perfectly in keeping with Shambala’s atmosphere and theme of unexpected surprises! Professionally and imaginatively delivered from concept to build.”Chris Johnson, Director Shambala Festival

What is left of a house if you take away its roof, floors and walls?A commission of new original work designed and installed for Shambala Festival, a highly successful and established arts event, renowned for its creative, unique programming.With a history of investigation into crafted spaces that play with inside and out, we made a pot, sat round the table, took a house and considered, “If a house no longer serves as shelter, what does it become?”The result was a piece that turned a house into a multi-layered storytelling device, the doors and fixtures providing anchor points for people’s own narrative.Running for the duration of the festival, the piece became a stage set, meeting place and a games board, where imaginations ran riot and dynamics changed from daylight family games to intrigue and mystery through shadows and spotlights under cover of darkness…

A human-shaped, raised horticultural display showcasing the effects of plants on different parts of the human body. Walk around the face and find the natural skin treatments people have used throughout the ages. Reach the heart and encounter the plants commonly employed as love potions and aphrodisiacs. A visual touchstone of the festival, this beautiful work will embody the cultural, medicinal and scientific links between plants and man.

Burn the Curtain Company of Wolves

‘One beast and only one howls in the woods at night’

In a tiny village on the edge of the mountains, a young girl puts on her red shoes and cloak, and heads into the forest alone, watched by unseen eyes. As the shadows lengthen, she begins to run…

Angela Carter’s classic tale has been adapted by Burn the Curtain and Shiona Morton to be a promenade theatre adventure for runners and walkers. It also includes elements of the author’s stories ‘Wolf-Alice’, ‘Peter and the Wolf ‘ and ‘The Werewolf’.

Join Burn the Curtain in the theatrical re-telling of this dark and mysterious modern classic. We need you to run or walk with us. To help us to sniff out those who have been born feet first, to hunt those who are hairy on the inside…

The route will be between 2 miles for walkers, and 5 miles for runners. The tale will be performed along the way.

To take part in the show, come prepared for physical activity, either running or walking, with appropriate clothing and good footwear. Some of the action will take place in the dark, so bring a torch or head torch if you have one.

There are several route options you can pick the path you want to take at different points in the performance. Choose to be a hunter or a gatherer, fleet of foot or eagle eyed, to pick up the pace, or tread carefully along the forest path.

However, stray from the path for one instant, and the wolves will eat you . . .

If we cannot imagine a positive future, how can we create it? A Summit of arts, environment and sustainability at Wales’ pioneering sustainability hub the Centre for Alternative Technology, in 2012.

Emergence is a series of creative, interactive conferences for people working in the arts in Wales. It’s an opportunity to network, share ideas, ask questions and get tools for a more sustainable practice; to celebrate the anarchic and unpredictable spirit of art and learn practical ways in which artists can make a difference in these times of ecological, economic and social instability.

Emergence will create focus and momentum within the arts in Wales, with the intention of making the vision of a One Planet Wales real, relevant, attractive and achievable.

We will focus on two main themes: developing a low-carbon arts infrastructure, including the management and development of venues; and developing the role of the arts as a crucible of ideas and visions for a low-carbon One Planet Wales.

I ran an Arts and Values workshop with Rosie Leach from the Public Interest Research Centre (PIRC) as part of their Common Cause project.

Thanks to all the people who came along and made it such a wonderful experience.

We could have stayed a month exploring all the material possibilities and interpreting the site through visual and spatial means. However we had little more than 2 days and the outcomes are a testament to our belief that not providing a brief would allow space for genuine creativity to soar unbounded.

3 ideas made it through testing to final pieces. The skybowl and Piddle, paddle, plonk reside near our base camp. The third piece located deep in the woods was inspired by the idea that all life comes from death and had as its focus the root ball of a fallen oak tree. This became the starting point for the piece called Bioshroom, also known as Rhizome, now named Fungidome by the kids who are camping at Graig Wen who have come to love the sculptures and care for them in all their fragility and impermanence.

Ewan aged about 11 said that “Fungidome is a combination of wood, tools and a bit of imagination.”

And Charlotte aged 10 said that “Piddle, Paddle, Plonk is the best because it plays music a bit like a xylophone but in the water, although Skybowl is quite good when you lay in it at night watching the stars because there’s nobody there and its relaxing.”

“Craftedspace have a sensitive and collaborative approach with a strong professional style. They created an imaginative community space that is invaluable to its residents.”Ryland Llewellyn, Urban Renewal, Caerphilly Borough Council

A community creation, Craftedspace was invited to answer an exceptional brief to create an artwork for the residents of Groesfaen, funded by Heads of the Valleys Artworks, Wales.With a passion for projects of this kind, we launched a programme of workshops and events that included local walks, den making and tea drinking to explore the aspirations of the residents. Everybody wanted something for the kids, a storytelling place or a den.
The result – an original design that evokes myth and local legend, where the landscape and building become one; an unusual round weathered oak framework nestled into the hillside.Created from a broad array of stakeholder inputs and approved by play safety and structural engineers, the space was created for everyday climbing and playing as well as for local legend storytelling! It’s great to hear the kids feel it is theirs.